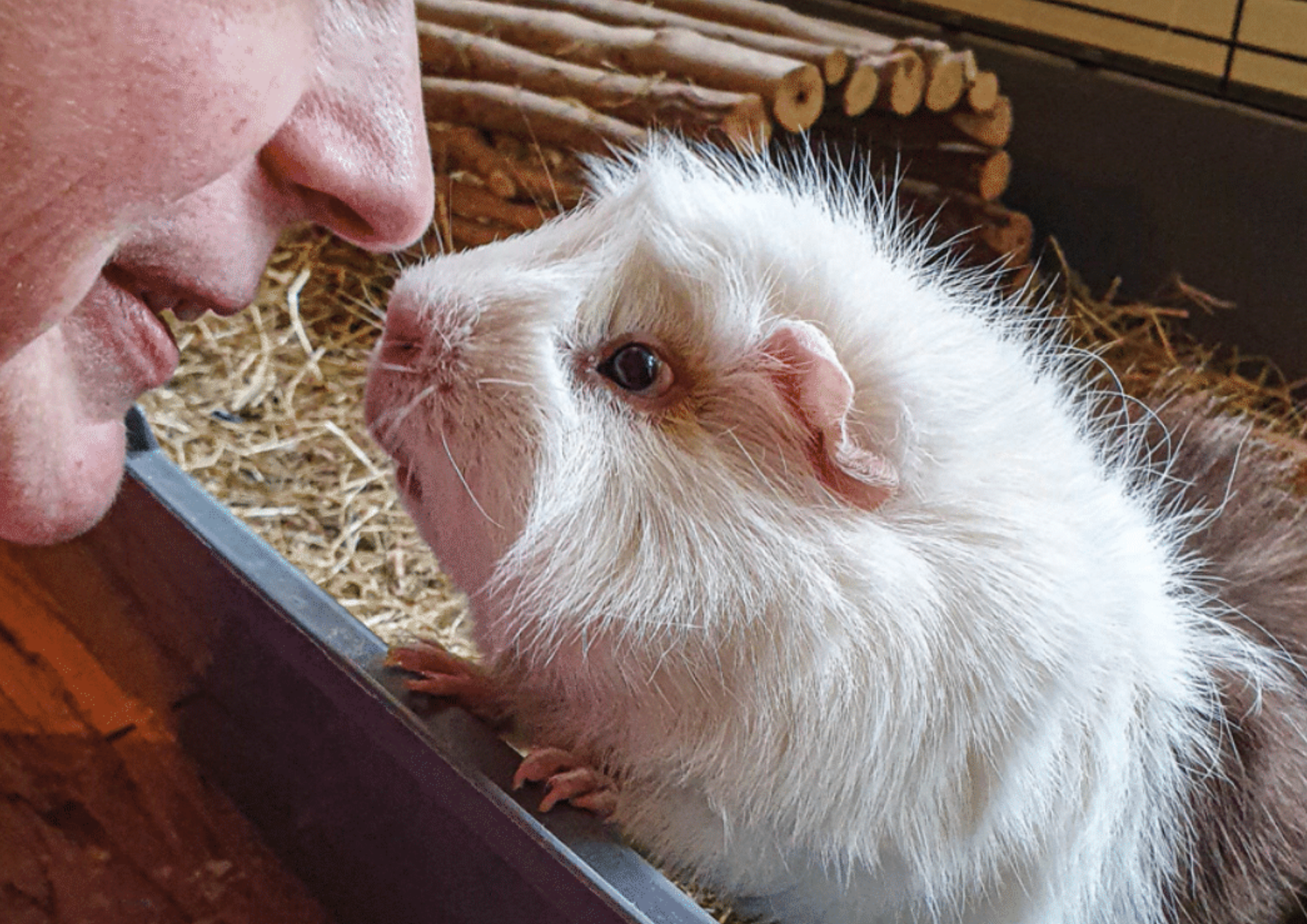 The sense of smell for a guinea pig is well developed and plays an important role in communicating, seeking food and recognising familiar friends. As you learnt from the article on sight, a guinea pig does not see well right in front of them, so they particularly rely on smell to find food. A guinea pig’s nose is triangular in shape having two nostrils or Nares with surrounding bare skin with no hairs around the edges.

Once air enters their nostrils, it passes over specialised skin which has a large number of sensitive smell receptors. These receptors are tipped with minute hair-like projections called cilia which have mucus on the surface. These damp cilia allow the odour particles travelling into the nostrils to stick and bind to the receptors. The receptors are each on nerves and send messages up these nerves to the brain’s olfactory bulbs. Here the smell can then be recognised. The olfactory bulb has tiny structures called Glomeruli covering the surface. Around 2000 of these basket-like formations each pick up a specific odour molecule for recognition. From birth, these olfactory molecules are continually learning new odours such as their mothers smell and recognising what is safe to eat.

HOW A GUINEA PIG USES ITS NOSE

What do guinea pigs use their sense of smell for?

Guinea pigs use their sense of smell when interacting with their friends or when being introduced to an unknown guinea pig. When meeting a new friend, not only do they smell each other but they also smell any urine or faecal pellets left behind to find out information about the newcomer.At the base of each hair follicle in the skin is a sebaceous gland. Guinea pigs have many of these glands, especially along their backs and grease gland area(on their rumps down to their anus). A boar has a well-developed grease glandand also a perineal gland located insidethe perineal sac (anal sack) within theskin folds. This scent gland becomes active around 4-5 weeks of age at puberty sets in and once they start producing testosterone both of these glands are used for marking territory and as a sexualattractant and can sometimes produce a rather stinky smell! Often the males drag their bottoms along the ground marking it with a scent,or they rub up against objects with a side to side movement of their rump. Guinea Pigs learn about each other by sniffing,licking, or through the smells left behind in the air – or wiped on the ground. Boar or male guinea pigs are very sensitive to the smell of female guinea pigs. If you have both genders in your household, take care not to handle the females before the males as this can cause fighting between even long term friends.

Sometimes boars can fight having females living in close quarters to them, especially when a sow goes into season. Once paired,take care not to over wash their grease gland as this provides a familiar scent.Also, if one of your males is needing a bath, shampoo both so that they smell the same. Washing your hands between handling females and males can help to stop the exchange of scent from the sows,causing any aggression between the boars.When conducting a health check on your guinea pig, please pay particular attention to their nostrils and their breathing.

The Nose should be dry and free from any discharge. A few sneezes are a common thing to hear from your guinea pig, but ongoing sneezing needs to be investigated by your vet. When looking them over, see if they are flaring their nostrils showing that they are working hard to take in oxygen and check their sides to see if they are pumping with each breath.

Difficulty or laboured breathing is called dyspnea and is a serious condition for a guinea pig as they are obligate nose breathers, having a need to breathe through their nose. This can cause them great distress and is often a sign of a respiratory infection. Other causes can be pain, ametabolic condition, heatstroke, bloat, cardiac disease, anaemia or anxiety and fear. This condition is extremely serious.Should you find your guinea pig open-mouthed breathing, immediate attention from your vet is necessary as respiratory infections can very quickly become deadly.

Why are these odors important, and what information can they provide?

Medical issues that can interfere with the workings of the nose 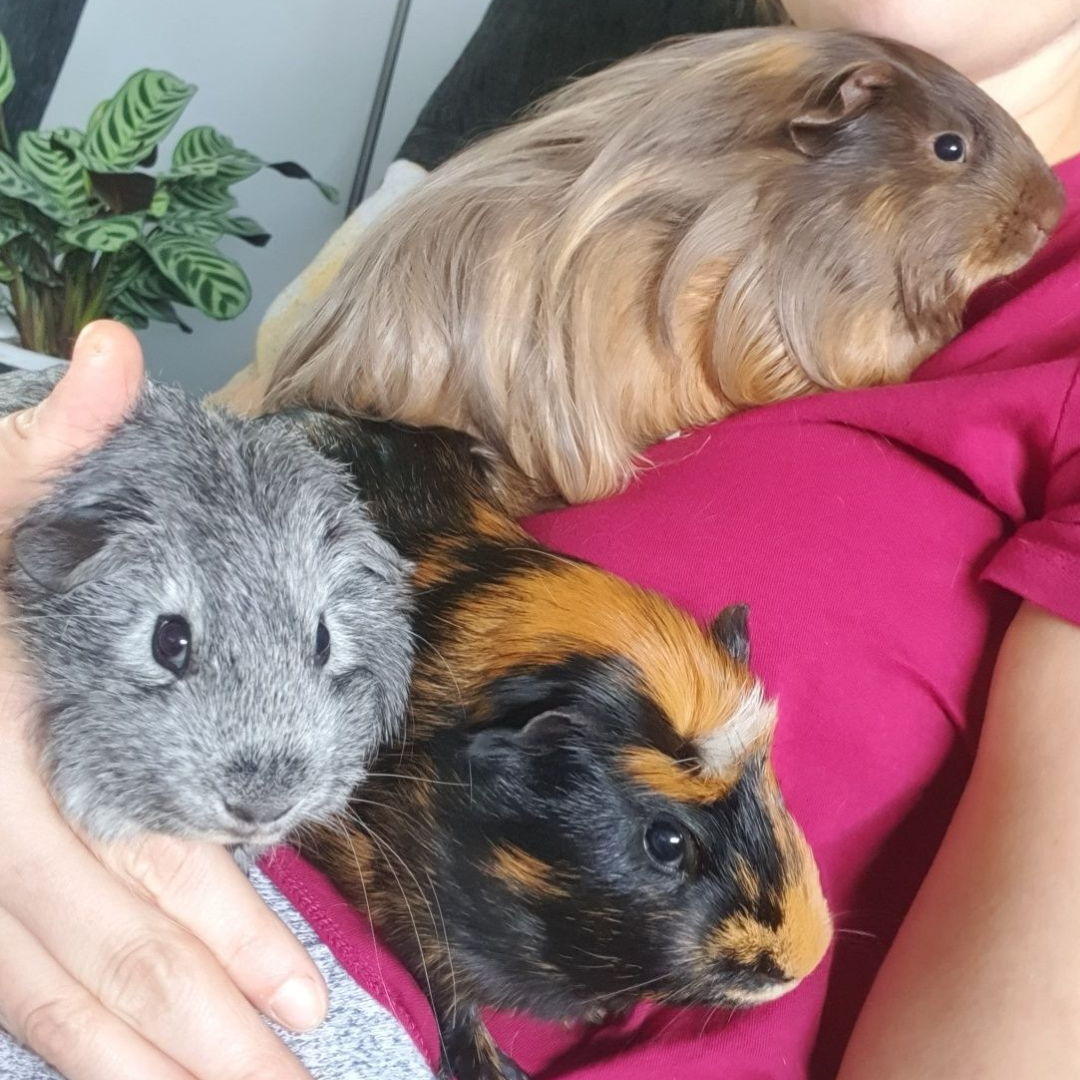 Fireworks can be exciting and fun for us humans, but for our guinea pigs this time of year can be very stressful and upsetting for them. Sudden loud noises, bangs, whistles and flashes of bright light can terrify guineas, and in the worst cases can bring on a stress related heart attack, so it is important that you take steps to try and minimise any fear and distress that fireworks may cause to your piggies.

If your guinea pigs live outside we would recommend bringing them indoors during times when fireworks may be going off. However, please be aware that sudden changes of temperature can be dangerous – so if the weather is freezing and you bring your piggies in for a couple of nights, be very careful putting them back outside if it’s very cold.

If you can’t bring the hutch indoors, then turn it around so that it faces a wall, and put a heavy blanket or tarpaulin on top to cut out the light and reduce noise (but be sure to leave plenty of ventilation).

Provide plenty of ‘hideys’ in the hutch- cardboard boxes stuffed with hay and with hole cut out for them to hide in, tubes and tunnels, large piles of hay to burrow in so that they can feel secure and safe.Although you may not be able to stop them feeling frightened, you can help them deal with the situation.

Close all curtains, windows and doors to muffle sounds and lights

Put a radio or television on – it won’t drown the noise of fireworks out com-pletely, but will help deaden the sounds

Make sure your guinea pig has a companion to keep him company and provide support and security. Guinea pigs take comfort in having members of their own species around during stressful times, and companionship is the big-gest protector against fear in guinea pigs.

If your guinea pigs are housed in a shed,place blankets up against the windows to keep out the light and muffle sounds. Again,leave a radio on if possible and ensure venti-lation is unaffected.

Keep handling to a minimum and try to remain calm at all times so that your guinea pigs do not sense that something is ‘wrong’.

If you want to see the fireworks,go to an organised display rather than having fireworks in your own garden,and encourage your neighbours to do the same

Finally, have fun during the firework season, but make sure your pets are kept safe and secure.