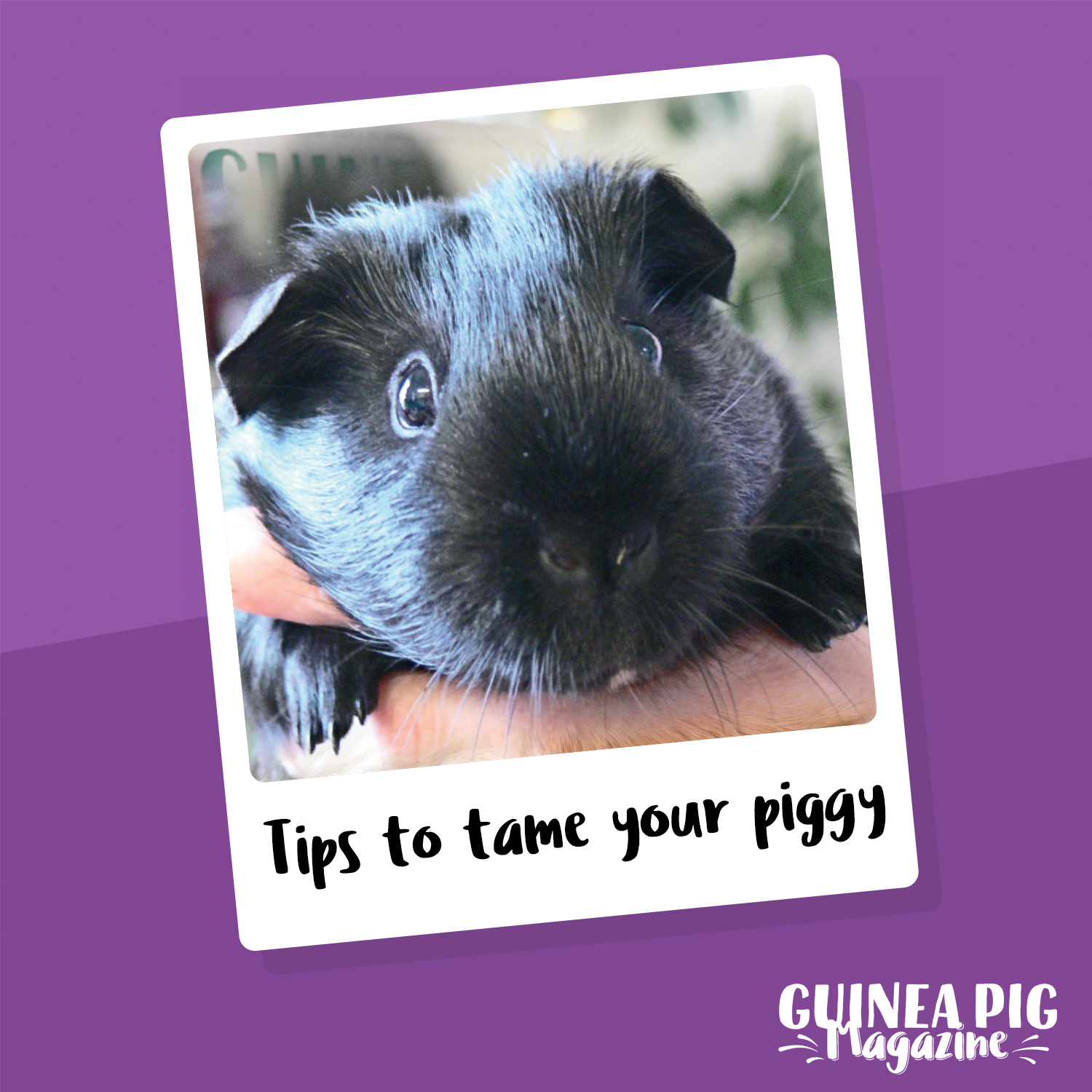 You may be their new loving owner, but you’re also several times their size and you smell strange! The first thing you should understand is that guinea pigs are prey trust has to be earned. Many new owners become worried when their guinea pig would rather flee than have a cuddle, however this is very normal and the vast majority of guinea pigs, save for the occasional unusually brave guinea pig, when introduced into a new environment will react by running away and hiding. One of the most common questions I’m asked is “will my guinea pigs become tame?” And as I say to everyone, yes they will become tame with time, patience and positive interaction.

You should try and leave them in peace for most of the day (this includes the children too!), to help them adjust to their new environment; however you can quietly check in on them every so often to see what they’re up to. Guinea pigs are unlikely to eat and drink in front of you during the settling in period. They are very likely to venture out of their hidey holes during the night however, so when you check them in the morning they will most probably have eaten most or all of their vegetables and the water level in the water bottle may also have gone down a bit too. The amount consumed during the night varies and there is no particular amount that should be expected. Occasionally, a guinea pig might not eat or drink for a day or two after arrival in a new home (although one would assume they would at least be drinking a tiny amount of water), while others may pick at their food and water for you. Teaching your children to respect the needs of the guinea pigs is particularly important at this time.

Over excited children will frighten the guinea pigs and delay the progress of gaining trust in their new family, and so you must ensure your new pets are given the time, space and quiet they need.

You should have noticed how much food and water has been consumed during their first night, even if they have consumed only a small amount this is a positive sign, the same being true for any disturbed items or bedding that is evidence of exploration. When feeding them and also in passing you should be sure to talk to your guinea pigs. If they live outside, you should make regular detours to go and see them. This will put them on the path to recognising your voice and associating you with safety. You can also quietly leave your hand in the hutch or cage for them to sniff if they feel brave enough. This may be too soon for most guinea pigs so don’t worry if they don’t have the confidence yet to investigate you. Your children should be encouraged to approach the guinea pigs slowly and quietly. Patience on the part of your children is the key here, as naturally they will probably want to pick up and cuddle the new family pets. It is very tempting to pick them up and you can try this if you make the process as stress free as possible for both you and your guinea pigs, or you may undo any confidence they have gained during their first 24 hours in their new home.

Ensure your children are standing back and quiet or not present while you attempt to pick up your guinea for the first time. Herd your guinea pig into a corner with an open hand, and place one hand under the belly and the other hand under the bottom to pick them up. Hold the guinea pig firmly to your chest and talk to your pet. Most untamed guinea pigs prefer to be wrapped in a towel and held to the chest for that feeling of security. As you and your guinea pig progress, you can sit in a comfy chair or in front of the television with a towel on your lap or chest, allowing the guinea pig to sit on the towel while you stroke them with an open hand from head to bottom. Fresh vegetables are an excellent source of bribery during cuddle time! As they become more confident your guinea pig may start to stretch out and even go to sleep. If your guinea pig is very frightened and makes an attempt to jump over your hand and take flight around the hutch or cage, you may need to stop the picking up process and try again later once they have settled again. Controlled attempts to pick them up combined with regular visits, allowing them to sniff your hand, and talking to them are the way forward.

You should be picking them up on a daily basis and having them out for cuddles, even if your guinea pigs are wary and still dislike being caught. The guinea pigs should be starting to eat and drink during the day, and sometimes even in front of you. Progress will vary depending on the guinea pig and the effort from you to help them to settle in. You should also have an established feeding routine by now to include their morning and evening feeds, as guinea pigs will predict when meals times are. This helps to regulate their day and give them confidence to know what to expect from you. There are also some slightly unusual methods you can use to try and speed the settling in process along. Some guinea pigs appear to enjoy listening to classical music on the radio for company and some owners claim this has a calming effect on them. Comfort is also another important part of helping guineas feel relaxed and this includes the use of fleeces and blankets.