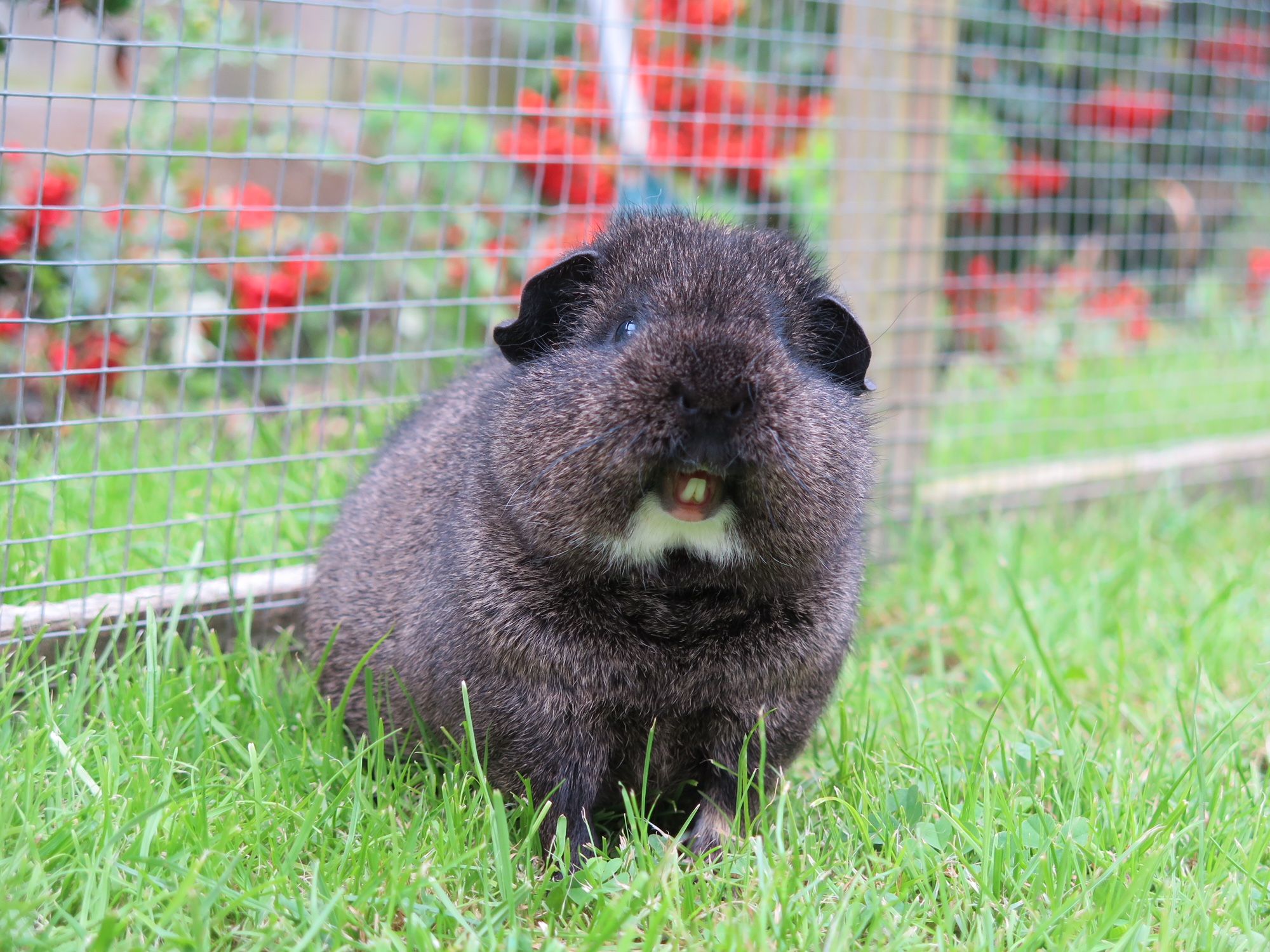 Sadly, there comes the time when their fast metabolism turns against even the healthiest of guinea pigs. While in wild populations a few guinea pigs can live up to 8 years, they are very much the exception. The average life expectancy is around3 years. This means that nature has not provided for well cared for domestic guinea pigs having a much more extended average lifespan of about 5-7 years, but it can extend to about 10 years occasionally. More than that is extremely rare.

Your good care, especially a mainly grass hay/fresh grass-based diet(close to their natural diet), leafy green veg and fresh herbs can help to boost the lifespan for another year or two. The upper end rather than the lower one, of the average life-span, but it cannot extend it indefinitely. There’s nothing you can do about significant health problems or a sudden death out of the blue at any age, which are beyond our control and any veterinary ability.

How are YOUR guinea pigs seeing and experiencing old age?

It is important to remind yourself that guinea pigs don’t have a concept for an average life-span. This is an entirely human idea. Guinea pigs measure their life in happy or unhappy here and nows.It’s not the number of days that count for them but the quality of their life.

When you concentrate on taking each day fresh and not on fixating on the length of life, you cannot go wrong as an owner .Guinea pigs do, however, recognise and respect older companions as long as they can keep up with the group and don’t display signs of infectious disease. They are valued for their experience and potential knowledge of extra resources, which may help to save the group in times of crisis.

Older guinea pigs know who they are,are comfortable in themselves and have nothing more to prove. They usually know love and a good life when they see it and appreciate all the good things that come their way.

A dominant leader may be pushed from the throne by an ambitious show coming up the ranks when the olderpiggy can no longer hold their own. When this happens, the old leader will be emphatically pushed towards the bottom of the hierarchy, while the new First Lady establishes her own reign.

This often coincides with an illness or developing a major health problem in the previous leader; they can show increased dominance in the lead up when they feel no longer quite fit to be fully in control but are not yet willing to relinquish.

If a sudden illness or an operation recovery creates a power vacuum, the next in line may feel obliged to step somewhat tentatively into the gap since keeping the hierarchical group going (whether that is a pair or a large group of different ages) is paramount and lead by default. If the default leader grows into their new role and is no longer willing to relinquish to the recovered leader, then you could be looking at a fall-out in adult piggies. If a leader is much beloved and respected, then the change in leadership will be as gentle and minimal as possible and be interspersed with affirmations of love.

Very old sows can become more willing again to accept companionship as they are beyond the age of leading a group. Especially if they have known each other but not always lived together, they will still recognise each other and remember well where they stand in relation to each other. Some who are insecure about a new company may take a bit longer when they feel or fear that the other side is stronger than them. But even next-door company and interaction are vital to keeping the zest for life going. It can really add more years to a piggy life! Older boars past 4-5 years whose testosterone has long fizzled out tend to mellow noticeably and are much more accepting of boar company compared to teenage or adulthood – most notably the very dominant and hormone-driven boys!

Companion very much comes before dominance when leadership is no longer at stake. However, this is only a general trend. Guinea pigs are very much individualists, and some can really hang onto grudges. You can always only deal with the personality at hand, and give it a try. But too many older piggies can still sadly fail in terms of old age companionship after the death of their mate. If the owner doesn’t want to continue, or even because of what happened to them as youngsters, it can dog them for the rest of their life. If you have got a rescue within reach, it may be worth contacting them for possible solutions. Especially the welfare-conscious rescues are becoming more aware that there is a growing awareness and need to find a welfare compatible option for the last remaining guinea pig.

Sadly, old age usually doesn’t come on its own for guinea pigs, either. In many cases, ageing is a gradual process that happens around 4-5 years. Still, some piggies can happily sail on for longer and look much younger than they are – like humans, calendar age and biological age are not necessarily congruent.

Old age can vary enormously in individual timing and overall fitness and health. Most Guinea pigs live somewhere between 4-9 years of age with 5-7 years covering the bulk. Some piggies will die young from a genetic problem, illness, neglect or breeding complications, a few blessed ones can live even longer. However, inevitably the body starts to change as time passes.

Muscles are sagging and first the hip bones, and later the spine becomes more prominent. With the body no longer working at full speed, weight is slowly disappearing. In overweight guinea pigs, this can be more noticeable when the fat reserves disappear rather quickly at some point,and the weight takes a larger tumble. Please have your oldies vet checked every 6 months, or at least once a year. Have them seen promptly during any larger weight loss over 50-100g (depending on the speed of the loss). In most cases, there is a developing health problem at the bottom of it, even if it may not be quite obvious. Compared to humans, the ageing process in guinea pigs happens in fast forward.

Impaction (a weakening of the musculature at the back that affects about 10% of old boars, both full and neutered) can result in them no longer being able to form and express the ‘caecotrophy’ poos that contain the not fully broken-down fibre for the second run through the gut. Large fluid-filled non-hormonal cysts or hard cysts turning cancerous are the types of ovarian cyst problems are more typical in older sows than the classic hormonal ones

The precise definition between the iris and the white of the eye becomes fuzzier with age. Old age cataracts and more rarely the even clouding up of lenses called nuclear sclerosis are not at all uncommon. A sharp, uneven white rim of bony material replacing the soft tissue around the iris is called osseous metaplasia and does occasionally develop – but any significant changes to the eye should be ideally vet checked.

General care for your elderlies: